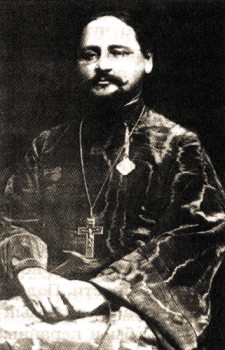 Oleksandr was brought up in the family of a priest, Father Vasyl. The Vyshniakov family counted 300 years of priesthood which passed from generation to generation. For his personal courage and heroism in a battle between German and Russian armies during WWI, Father Oleksandr was decorated with the Cross of St. George. He was at odds with the bolsheviks, hence he had a lot of problems. In the 1930s, he was repressed and sent to a Gulag camp in the Nagaev Bay.

Father Oleksandr came back from exile in 1940. He was the head of the Holy Trinity Cathedral. Soon after the outbreak of WWI, rumors started spreading in Kyiv about mass murders of Jews in Zhytomyr and Vinnytsia. Jews from Kyiv began reaching out to Father Oleksandr asking him to baptize them into Christian faith. The Father baptized them and issued baptismal certificates on church templates. This is how he saved many Jewish families from mass shootings, including piano player Raiskyi, opera theatre soloist Ivanov, dentist Pain with his family, and conductor Raklin.

After the start of mass shootings in Babyn Yar, Father Oleksandr received a visit from his neighbor Yan, a Hungarian Jew who had three children with his wife Sima. In the early days of the war, Father Oleksandr baptized their family. And now, Germans sent all of them off to Babyn Yar. Yan managed to escape. He asked the Father to testify to Germans that his family had been converted into Christianity. Father Oleksandr put on his robe and his Cross of St. George and went to Babyn Yar. There, he found almost the entire family and testified to Germans that they had been baptized.

In early November, he was arrested by the Gestapo. On 6 November, archimandrite Oleksandr Vyshniakov was shot to death in Babyn Yar.